Graphene oxide produced by the standard Hammers method was annealed at various temperatures. The measurements indicate a monotone enhancement of the electric conductivity of the annealed graphene oxide samples with the increase of the annealing temperature. The most prominent jump in the conductivity (about five orders of magnitude) occurs between 150 and 180 °C. At the annealing temperature of 800 °C, the conductivity of reduced graphene oxide reaches the values typical for highly oriented pyrolytic graphite. The measurements demonstrate a nonlinear
character of conduction of reduced graphene oxide (RGO) samples, which manifests itself in a sensitivity of the sample conductivity to the magnitude of the applied voltage. This phenomenon is explained in terms of the percolation conduction mechanism of the RGO samples, in accordance with which the charge transport is provided by a limited number of percolation paths formed by contacting RGO fragments. A model simulation performed on the basis of the percolation mechanism of RGO conduction agrees qualitatively with the experimental data obtained. 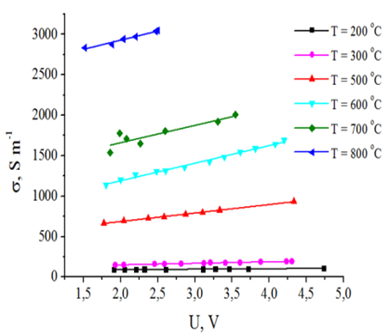